Arsenal star Mesut Ozil will miss Germany’s final warm-up match on Friday with a knee injury, but the attacking midfielder’s participation in the World Cup is not in danger, according to the German Football Association (DFB).

Ozil, 29, will sit out the friendly against Saudi Arabia in Leverkusen with light bruising to his left knee, but was able to run in training on Thursday.

“I didn’t take part in final team training today, but some running exercises were possible again,” he wrote on his official Twitter account. 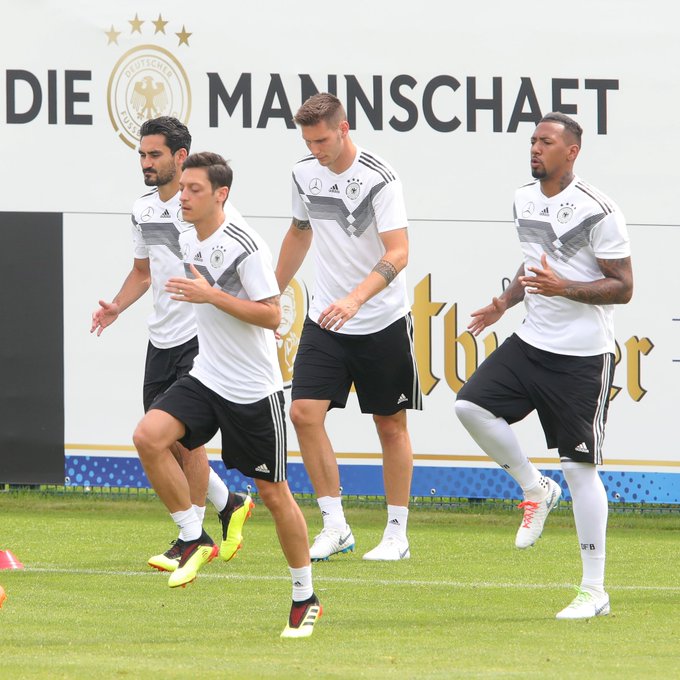 The midfielder, who picked up the injury in Saturday’s shock 2-1 defeat away to Austria, has not taken part in full training over the last four days at Germany’s pre-World Cup camp in Eppan, north Italy.

“It’s nothing dramatic, we just don’t want to take any risk and he was able to sprint in training. I assume he will be okay for the World Cup,” said Germany’s team director Oliver Bierhoff.

Ozil, who finished the 2017/18 season with a back injury, faces a race to get his knee ready for Germany’s first World Cup game against Mexico in Moscow on June 17 having also drawn South Korea and Sweden in Group F.

Germany, who are winless in their last five games, are set to name a full strength side against Saudi Arabia, who play hosts Russia in the World Cup opener next Thursday.

Bayern Munich star Jerome Boateng could play his first game since suffering a groin injury in April, “we assume that Jerome is now 100 percent fit”, said Bierhoff, but a final decision has not been taken.

With Ozil out, Paris Saint-Germain’s Julian Draxler is set to fill the attacking midfield role with Chelsea’s Antonio Ruediger stepping in for Boateng if needed.

World Cup winners Toni Kroos, Mats Hummels and Thomas Mueller are all set to return having sat out the Austria defeat with Timo Werner as the lone striker.

Having thrown away the lead against Austria, who enjoyed their first victory over their neighbours for 32 years, world champions Germany know they need to produce a good performance in their final game before flying to Russia on Tuesday.

“We’ve worked through the defeat, taken our mistakes to heart – tomorrow we want to do a much better job,” said left-back Jonas Hector.